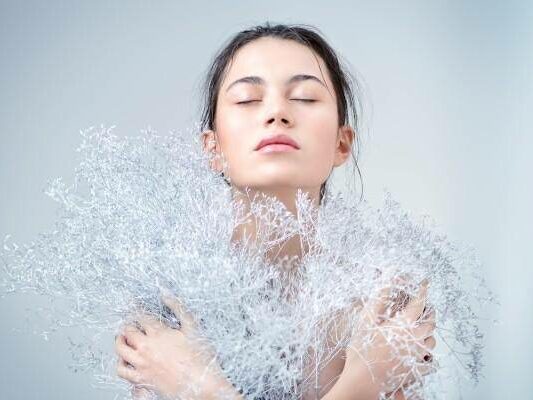 Nanotechnology is the study and application of extremely small particles (smaller than 100 nanometers – about 40,000 times thinner than a hair). In skincare, nano ingredients come in two forms: nanoemulsions – tiny droplets of liquid – and nanoparticles – solid ingredients such as titanium dioxide and zinc oxide.

Nanoemulsions contain oil and water droplets, reduced to nanometric size (less than 100 nanometers). This technology is useful in delivering active ingredients more effectively by increasing the penetration of the active compound into your skin. Nanoemulsions are generally recognised as safe, provided that the ingredients that they deliver are safe.

Nanoparticles (the solid version) are widely used in sunscreens and other products with UV protection. They have gained popularity for their ability to block ultraviolet rays while minimising the whitening effect on the skin. The controversy surrounding these insoluble nanoparticles relates to their potential to penetrate the dermis and possibly trigger an immune response. The particles are so small that the immune system can mistake them for invaders and launch an attack. There is also concern that the particles could enter the bloodstream.

Nanoparticles are something we have chosen to avoid as we feel that there are too many unknowns … so why take the risk? In our sunscreen, the zinc oxide particle size is strictly controlled using a series of sieves designed to discard any particle too large or too small. This keeps us safely above the nanoparticle limit of 100 nanometers but avoids the whitening effect. We also coat the zinc oxide particles with wax so that there is no potential disruption of your skin microbiome.

Esse Experience: Cutting-edge facial treatments to rewild the skin
10 May 2022
Recent Posts
Go to Top
We use cookies on our website to give you the most relevant experience by remembering your preferences and repeat visits. By clicking “Accept All”, you consent to the use of ALL the cookies. However, you may visit "Cookie Settings" to provide a controlled consent.
Cookie SettingsAccept All
Manage consent

This website uses cookies to improve your experience while you navigate through the website. Out of these, the cookies that are categorized as necessary are stored on your browser as they are essential for the working of basic functionalities of the website. We also use third-party cookies that help us analyze and understand how you use this website. These cookies will be stored in your browser only with your consent. You also have the option to opt-out of these cookies. But opting out of some of these cookies may affect your browsing experience.
Necessary Always Enabled
Necessary cookies are absolutely essential for the website to function properly. These cookies ensure basic functionalities and security features of the website, anonymously.
Functional
Functional cookies help to perform certain functionalities like sharing the content of the website on social media platforms, collect feedbacks, and other third-party features.
Performance
Performance cookies are used to understand and analyze the key performance indexes of the website which helps in delivering a better user experience for the visitors.
Analytics
Analytical cookies are used to understand how visitors interact with the website. These cookies help provide information on metrics the number of visitors, bounce rate, traffic source, etc.
Advertisement
Advertisement cookies are used to provide visitors with relevant ads and marketing campaigns. These cookies track visitors across websites and collect information to provide customized ads.
Others
Other uncategorized cookies are those that are being analyzed and have not been classified into a category as yet.
SAVE & ACCEPT